Shortly before midnight on June 25 came the phone call every parent dreads. “Nate has been in a kayaking accident, he hurt his back and can’t move his legs”.

The rest of the night was a blur of phone calls, updates, attempts at piecing together what had and was happening, and recognizing that our lives were not ever going to be the same.

A planned weekend of camping and white water kayaking with other accomplished boaters abruptly ended in disaster. Hitting a rock after a fairly routine drop over the falls, Nate immediately knew he was paralyzed. Then came the near miss of being washed over another huge waterfall, his life- threatening hypothermia, the helicopter rescue, the hospital, the surgery…all was happening so quickly. Six hours after the call I was on a flight to Colorado from my home in Maine. It was heartbreaking knowing that Nate was alone in the ER, his future uncertain, in pain, scared.

I arrived just as he came out of his first spinal surgery, neither of us comprehending that this was just the beginning step in a very long process. His pain was beyond belief, couldn’t be controlled. I felt so helpless. I could only sit at his bedside, hold his hand and watch his suffering. As time went by, his pain lessened, but his legs, once huge and muscular from his mountain biking, withered.

But we started celebrating small victories. One day while arranging his blankets I touched his leg, and he said, “Your hands are cold!” He could feel temperature! Then, a muscle twitch, eventually a minute movement. Seeing other patients at Craig, one couldn’t help but compare disabilities. “Wait, he can walk, what is he doing here?” or “At least I don’t have a brain injury”. Often Nate acknowledged that he was fortunate to have the function he did, but that was little consolation for him in the long term. It was overwhelming to him how much he had lost.

Amanda from Bridging Bionics reached out to Nate while he was still an inpatient at Craig Hospital. She offered hope and a plan for him once he returned home to Carbondale and back to teaching at Colorado Rocky Mountain School.

At no cost to him (insurance only pays for a few outpatient physical therapy visits, long used up) he was able to get up out of his wheelchair and walk in the exoskeleton only days after discharge. In the midst of all the pain and despair, Bridging Bionics brought a glimmer of hope. Nate has worked hard towards recovery, which was uncertain from the onset. But if anyone can overcome the odds, it is my son. His perseverance and determination are inspiring, and I am so happy that he is seeing such amazing results.

I’m so grateful that he has access to your program, and credit much of his recovery to Bridging Bionics as well as his own stubborn will. Nate has always valued friends over possessions, experiences over wealth, and he is extremely rich with both. Though an amazing athlete, he is a deep thinker, both a blessing and a curse. The tragedy of his injury has interrupted his pursuit of ever more exhilarating activities, allowing him time to appreciate the value of family and friends. Okay, so that’s me trying to find some good in all this, I admit.

Never lose hope, keep up the struggle. Thank you Bridging Bionics for all you do for Nate and your community.

Brenda is a physician at Maine Medical Center Department of Pediatrics and specializes in neonatology. She lives in Yarmouth, Maine.

Nate suffered a burst fracture of his second lumbar vertebra on June 25th, 2016 from a kayaking accident and sustained an incomplete spinal cord injury. He was 32 years old. After a summer spent in rehabilitation hospital, Nate astoundingly managed to return to his teaching career at the commencement of a new school year. He juggles his workload with his daily grind of learning to walk again. Nate personifies the word grit. Outside of Bridging Bionics, he works hard at his neuro-recovery every day with his own therapeutic regimen, which includes swimming, walking in the water, acupuncture, and massage. He is now able to take steps on his own without the bionic exoskeleton and continues to progress every week. 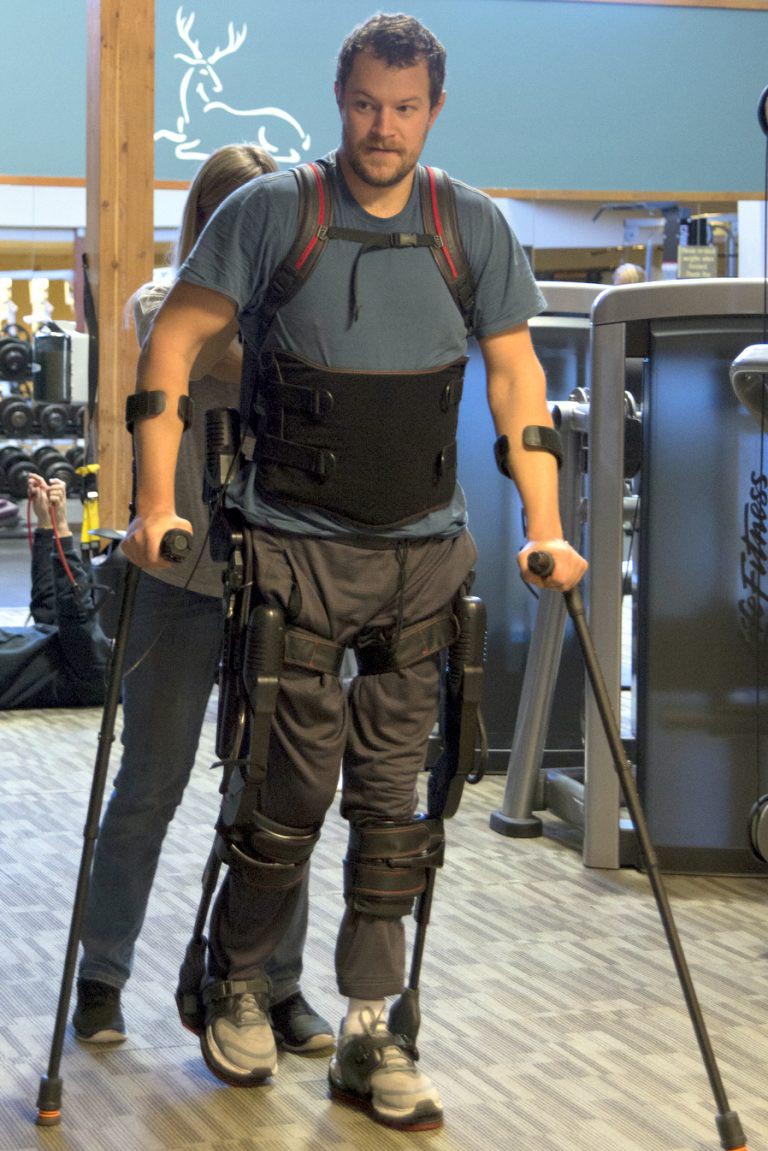 Nate walks in the bionic exoskeleton at the Snowmass Club. He is assisted by his physical therapist Maria. 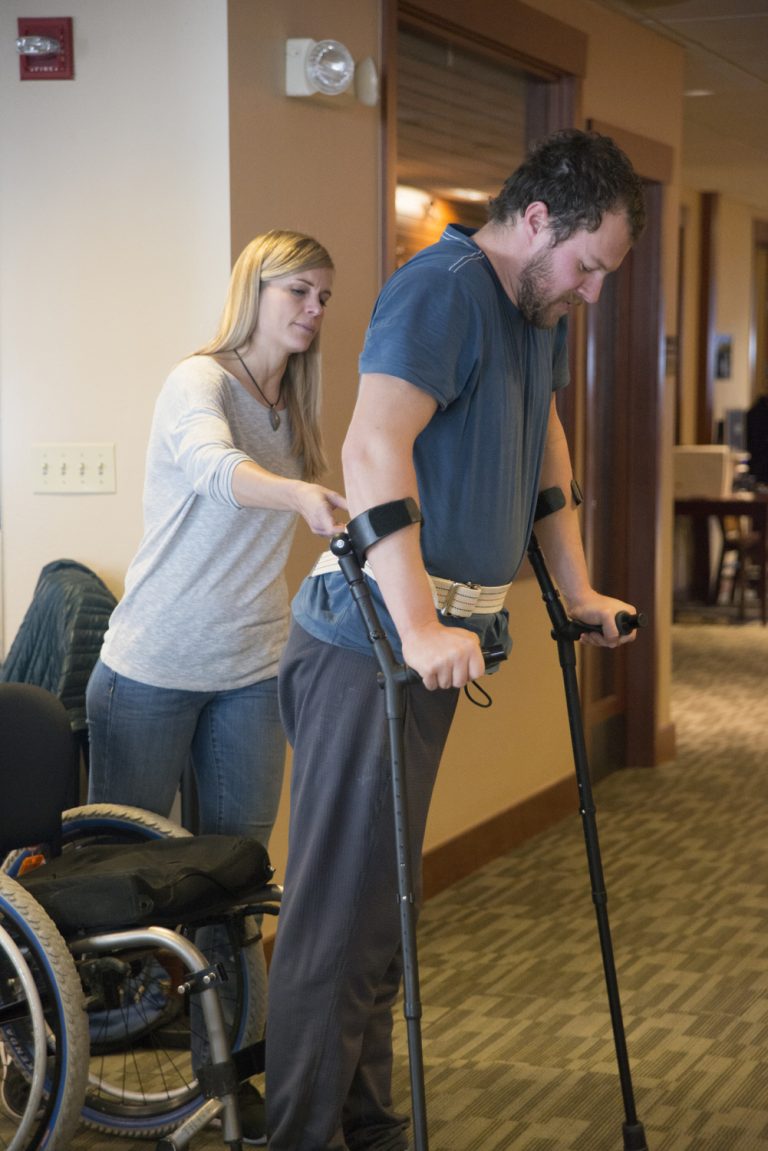 Nate stands up using the bionic exoskeleton. His physical therapist assists from behind. 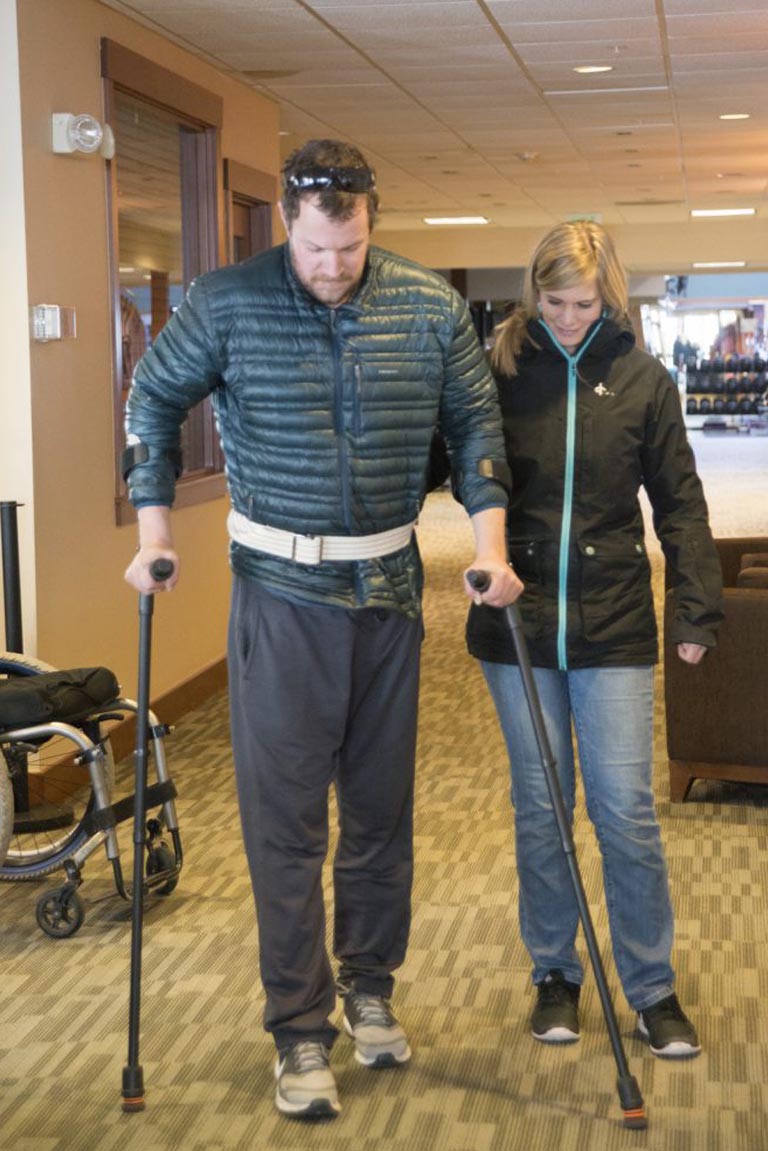 Nate stands up out of his wheelchair on his own and then walks independently without the exoskeleton.