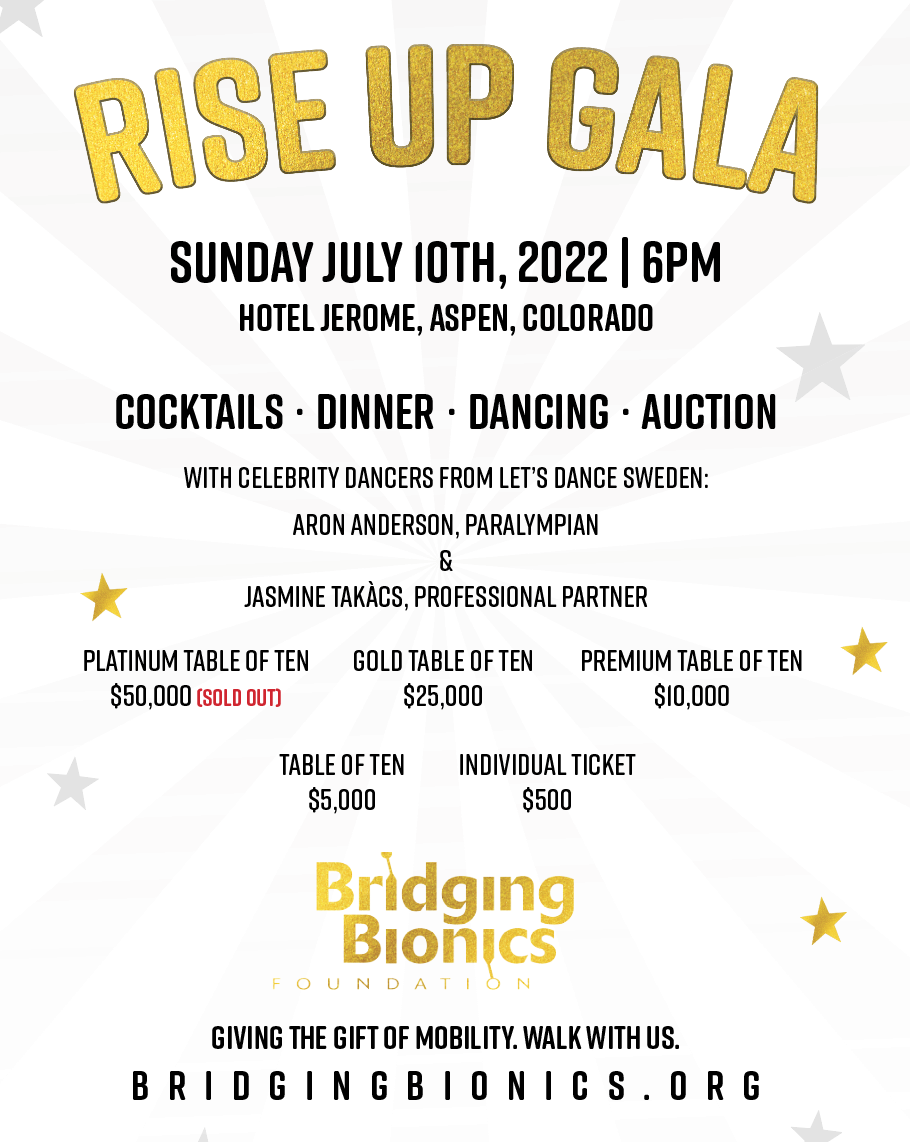 Purchase tickets online
To purchase tickets by check, please mail your check to Bridging Bionics Foundation and write Rise Up Gala in the Memo section.
Contact Zander Higbie at zander@bridgingbionics.org with event questions 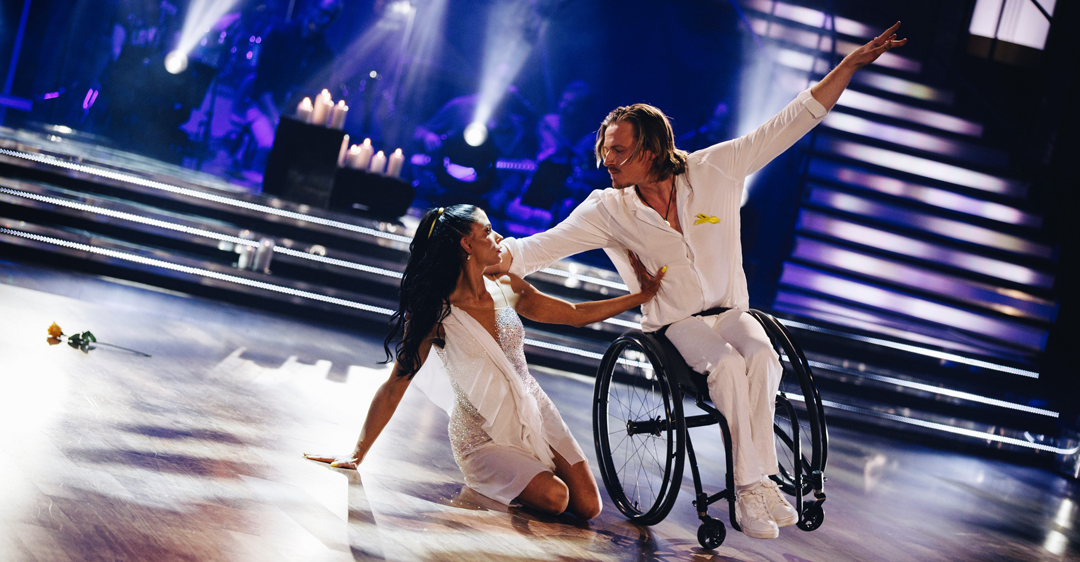 Aron Anderson is a childhood bone cancer survivor since the age of seven, and in 2021, he was announced as WHO/Europe’s Cancer Ambassador. He has had cancer four times and has endured fourteen surgeries. Aron is now 34. Most recently, Aron made history as the first ever male celebrity contestant to compete using a wheelchair in Let’s Dance, Sweden’s version of Dancing with the Stars. He and his professional dance partner, Jasmine Takacs, made it to the Quarterfinals and they have been praised internationally for their powerfully moving and energetic performances.

Aron is a Swedish adventurer, philanthropist, and motivational speaker. He’s taken on challenges that most people wouldn’t even dream of, and participated in adventures that require exceptional strength, both physically and mentally. Among his many accomplishments, he competed for his home country in four separate Paralympic Games; finished two IRONMAN competitions; he has climbed the Kebnekaise massif, the highest mountain in Sweden, and Mt. Kilimanjaro; he has biked 1,200 km from Malmö, Sweden to Paris; cross-country skied 300 km to the South Pole; and he swam 37 kilometers across the Sea of Åland from Sweden to Finland. Aron has used a wheelchair for mobility since the age of 10 years old. Today, Aron is a well-known TV personality, social media influencer, and mental coach. He has also managed to raise more than $2 Million for kids with cancer. Aron’s amazing feats inspire others to realize their potential.

Jasmine began her dance career at the prestigious ‘Balettakademien’ in Stockholm – Sweden, before training professionally at ‘the London Studio Centre’ in the United Kingdom. She is trained in everything from ballet to ballroom / Latin dance.

Jasmine is most known in the United Kingdom from Britain’s Got Talent, making it all the way to the final with her professional dance partner Aaron Brown with their dynamic dances that blew away Simon Cowell and the nation.

Jasmine has performed internationally with some of the world’s most famous artists throughout her career: Rhianna, Justin Bieber, Katy Perry, Jason Derulo, Taylor Swift,

Jasmine has been a part of BBC’s Strictly Come Dancing UK as a professional dancer since 2013. In 2017 she became a part of the Swedish version of Dancing with the Stars “Let’s Dance” and has been coaching different celebrities for six seasons. Most recently she made international history by partnering with the first ever male celebrity contestant in a wheelchair, the adventurer and motivational speaker Mr Aron Anderson. The pair made the quarterfinals and they have been praised internationally for their performances.

Jasmine’s choreography skills have been highly praised by the Swedish population.

Her choreography work can be seen in the productions of “Dance the Night Away Shows” a range of shows that, together with Aaron Brown, they produced and created. They have toured with their shows all over the world and most recently headlined the prestigious Dubai
Opera House with their cast of professional dancers and singers.

Jasmine has also featured in Hollywood films such as: James Bond 007 ‘Spectre’, which portrays her as the iconic Bond Girl dancing silhouette during the opening titles, Mamma Mia 2 and Beauty and the Beast.

By submitting this form, you are granting: Bridging Bionics Foundation, PO Box 3766, Basalt, Colorado, 81621, United States, www.bridgingbionics.org permission to email you. You may unsubscribe via the link found at the bottom of every email. (See our Email Privacy Policy for details.) Emails are serviced by Constant Contact. Email addresses will not be shared outside of Bridging Bionics Foundation.